A very well organized and disciplined South Africa beat England 32-12 to win the Web Ellis Rugby World Cup in Japan in the majestic stadium of Yokoma.

Under the leadership of first ever black captain Kolisi, South Africa were utterly dominant of the English men as they defended well and gave Eddie Jones’ men a lot to think about.

Having knocked out New Zealand in the semi finals, there was so much hope that England could have gone all the way to win the Webb Ellis cup down in Japan.

Handre Pollard was absolutely magnificent for South Africa converting all penalties and only missing one as South Africa took the lead to get their hands on the Rugby World Cup title.

Siya Kolisi the first black man to captain the Springboks hoisted the trophy high into the Yokohama night and was instantly showered by golden streamers as fireworks lit up the sky at the end of a momentous 32-12 triumph.

Giant number eight Duane Vermeulen agreed. “We are doing it for each other but also for 57 million people back home in South Africa,” the man of the match said.

This night was all South Africa’s as they won their third World Cup to draw level with New Zealand as the most successful side in the tournament’s history. With three cups from three finals, they are the only nation with a 100 percent record in the showcase match.

England lost finals in 1991 and 2007, the latter to South Africa, and now join France as three-time runners-up.

South Africa dominated the scrum, were immense in defence and ground down the English. They even crossed the try line, not just once but twice — their first tries in any World Cup final — when first Makazole Mapimpi bounded over the line in the 66th minute to add a beautiful bauble to their prodigious work rate, and then Cheslin Kolbe skipped through the ragged England defence to drive home their superiority.

‘Mr Metronome’ Handre Pollard, meanwhile, had been ticking off the points for this famous victory, scoring 22 from the tee, but it was Faf de Klerk who pulled the levers for this win. 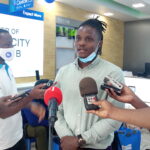